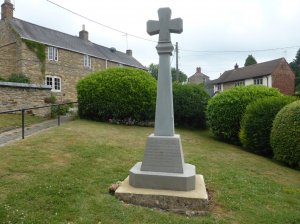 The renovation of our War Memorial is now complete and is now resplendent in all of its former glory. The central column has been replaced with Forest of Dean stone and the dedications and commemorated names can be clearly read. Do stop by our wonderful church and have a look for yourself. Any comments would be gratefully received.

Denton War Memorial was paid for by the parishioners, is grade 2 listed and was unveiled on 1 August 1920 by the Marquis of Northampton. The dedications and commemorated names of those lost in the First World War are carved into the plinth and further details were added later to commemorate those lost in the Second World War.

The war memorial is carved from grey Forest of Dean stone, stands 3.5m high and is set on a tapering square plinth that sits upon a two-step base.

Gigaclear responsible for fibre in the village